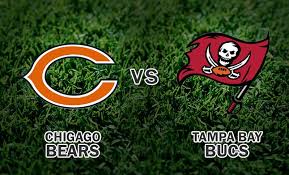 Heading into week 2 for the Bears and the home opener for the Buccaneers, there was plenty anticipation to see Glennon back in Raymond James Stadium and Winston entering his 3rd season in the NFL.

Winston is the only quarterback in NFL history to have back-to-back seasons with 4,000+ passing yards, so you can only imagine to expectation and excitement for the 2017 season. Not to mention Winston now has two other weapons to participate in the passing game!

The Buccaneers started the game on offense where you did see a slightly more composed Winston, after a few broken up passes you saw strong connections to Evans and the Bucs new addition, DeSean Jackson. The Bears worked well to contain the Bucs running game, forcing the Bucs after a few plays to go for a field goal putting them up 3-0.

Glennon came out and passed well for the pressure he was under from the Bucs defense, really utilizing his, RB, Cohen. As the Bears started to make way, Bucs Linebacker, Kwon Alexander intercepted a ball from Glennon gaining a 22-yard return, positioning the Bucs on their 38-yard line. After struggling to move the ball, Bucs opted to punt; the punt was fumbled and then recovered by Tampa Bay on Chicago’s 13-yard line. Tampa Bay took advantage of the positioning and Winston connected with Evans on a 13-yard pass with 10 seconds left in the 1st quarter!

That must have been the fuel to Tampa bay’s fire because they just kept on rolling after that. Tampa’s running back Rodgers ran in a touch down putting the Bucs up 17-0. As Glennon came back in to try and catch his team up, the Bucs’ DB, McClain ends up with a pick 6 for a 47 yard touch down towards the end of the 2nd quarter and closed off the first half of the game with a 50-yard field goal from Nick Folk.

Returning from half time, Tampa Bay continued their success on both offense and especially defense containing the Bears to just one touchdown, where Glennon threw a 14-yard pass to Deonte Thompson. Making the game final 29-7, Bucs Victory!

Next the Buccaneers head up north to Minneapolis to face the Vikings, Sunday at 1pm.